PAUL PALLATH
PAUL PALLATH holds doctorate in Eastern Canon Law from the Pontifical Oriental Institute in Rome and in Western Canon Law from the Pontifical Lateran University. Through study and research he has also deepened his knowledge in the liturgy and history of the St Thomas Christians in India and has established himself as an authority in these subjects as well. For more than 16 years (15.5.1995-30.9.2011) he rendered services as an Official of the Congregation for Divine Worship and the Discipline of the Sacraments, at the Vatican City in Rome. On 3 November 1999 Pope John Paul II granted him the title of Monsignor. During 1996-2001 he served as a member of the Vatican Liturgical Commission for the Great Jubilee 2000. Since the academic year 2003-2004 he has been a professor at the Pontifical Oriental Institute in Rome. On 1 October 2011 he was transferred to the Tribunal of the Roman Rota and on 10 July 2012 Pope Benedict XVI appointed him as Office-Head. On 16 September 2013 Pope Francis promoted him as Relator of the Congregation for the Causes of Saints and on 19 February 2014 as Consultor of the Congregation for the Oriental Churches. He is also a Commissioner of of the Roman Rota.


Paul Pallath was born as the first child of Augustine and Mariakutty Pallath on 7 June 1959 at Ezhacherry in the diocese of Palai in Kerala, India. He studied at St. John's LP School Ezhacherry, Sacred Heart Upper Primary School Ramapuram and at St. Augustine's High School Ramapuram. After his minor seminary formation at Good Shepherd Seminary Palai,  he continued his philosophical and theological studies at the Pontifical Institute of Theology and Philosphy Alwaye in Kerala. He was ordained to the priesthood for the diocese of Palai on 3 January 1987.
He has three sisters and a brother. His sisters are Sunitha CMC (Congregation of the Mother of Carmel), Alice (married to Reji Mittathanickal in Teekoy) and Sunija Maria CMC. His youngest brother Sebastian married Alphonsa (Jyothi) Vattoth on 14 September 2013.
Here follow the details concerning titles, responsibilities and offices held by Msgr. Paul Pallath.


1. Bachelor of Philosophy (B. Ph): in 1982 from the Pontifical Institute of Theology and Philosophy, Alwaye in Kerala.

2. Bachelor of Theology (B. Th): in 1987 from the Pontifical Institute of Theology and Philosophy, Alwaye in Kerala.

3. Licentiate in Eastern Canon Law: in 1991 from the Pontifical Oriental Institute in Rome.

4. Doctorate in Eastern Canon Law: in 1994 from the Pontifical Oriental Institute in Rome.

5. Doctorate in Latin Canon Law: in 1997 from the Pontifical Lateran University in Rome.

7. Prelate of Honour: on 11 November 2011 Pope Benedict XVI has “elected, made and declared him Our Honorary Prelate”, granting him the privileges, honours and prerogatives pertaining to this dignity (Document, 11.11.2011).

10. Books published 22: he has published 22 books, without counting different editions and translations or adaptations in other languages;  4 books are in italian, 1 in German and 17 in English. For details see the home page of this blog.

11. Articles published 113: for details see the page in this blog entitled "Articles of Paul Pallath".


1. Assistant parish priest of St John Nepumcian’s Church at Kozhuvanal in the diocese of Palai, Kerala, from 14 February 1987 to 3 February 1989.

4. Official of the Congregation for Divine Worship and the Discipline of the Sacraments at the Vatican City in Rome from 15 May 1995 to 30 September 2011 (for16 years).

6. Professor at the Pontifical Oriental Institute in Rome:  he started teaching at the Institute in the academic year 2003-2004 as a visiting professor. After a few years of teaching, on 28 April 2014 he was appointed as associate professor for five years. After the completion of the said period, on 3 April 2019 the appointment was renewed for another five years (2019-2024).

7. Assistant of the Postulator Fr. Luca De Rosa for about 10 years for the Cause of the Canonization of St Alphonsa, which took place at St Peter’s Square on 12 October 2008 and for the Cause of Augustine Thevarparampil (Kunjachan), beatified on 30 April 2006 in Ramapuram, Pala, Kerala.

10. Official of the Roman Rota at the Vatican City State from 1 October 2011. When Pope Benedict XVI created a new administrative office at the Tribunal of the Roman Rota and transferred to it some sections of the Congregation for Divine Worship with the motu proprio Quaerit semper of 30 August 2011, he opted for the said new Office.

11. Office-Head of the Roman Rota: On 10 July 2012 Pop Benedict XVI appointed him head of the Office dealing with procedures for dispensation from ratified and non consummated marriage and causes for nullity of priestly Ordination, at the Tribunal of the Roman Rota.

12. Relator-Congregation for Saints: on 16 September 2013 "the Holy Father appointed Msgr. Paul Pallath as Relator to the Congregation for the Causes of Saints. Msgr. Pallath was formerly head of the Office dealing with procedures for dispensation from unconsummated marriage and causes for the nullity of priestly ordination, at the Tribunal of the Roman Rota".
"The individual Relators are: 1. to study the causes entrusted to them, together with collaborators from outside the Congregation, and to prepare the Positions on virtues or on martyrdom; 2. to prepare written explanations of an historical nature which may have been requested by the Consultors; 3. to be present as experts at the meeting of the theologians, although without the right to vote" (John Paul II, Apostolic  Constitution Divinus perfectionis Magister1983, art. 7).

13. Commissioner: on 8 October 2013 he was appointed a Commissioner of the Tribunal of the Roman Rota for examinig the fact of non-consummation and the existence of just causes for granting a dispensation in ratified and non-consummated marriage cases.

14. Consultor-Eastern Congregation: on 6 February 2014 Pope Francis appointed Msgr. Pallath Consultor of the Congregation for the Eastern Churches for five years. After the completion of the said period, on 9 July 2019 he was confirmed for another five years (2019-2024).

15. Member of the Liturgical Commission: on 1 September  2015 Pope Francis renewed the Liturgical Commission in the Congregation for the Eastern Churches appointing His Excellency Piero Marini as President, Fr. MaLeen Cummings as Secretary and Msgr. Paul Pallath as one of the five members.
16. Consultor-Legislative Texts: on 25 November 2020 Pope Francis appointed Msgr. Pallath Consultor of the Pontifical Council for Legislative Texts with special competence for the canon law of the Eastern Churches for a period of five years (2020-2025). 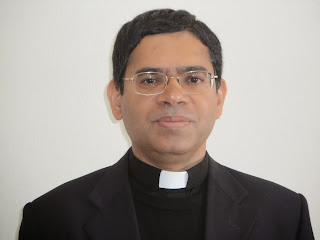